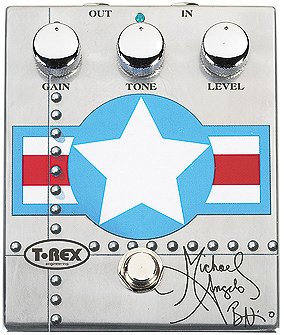 Heaven-sent overdrive
Michael Angelo wanted a pedal that would give him creamy, classic overdrive without clouding his unique touch and tone. T-Rex produced an overdrive unit with a sound sweet enough to make an angel cry, but with an earthy bite and punch! From a medium blues crunch to a rock guitar wail, Michael Angelo overdrive covers the full spectrum of overdrive distortion.

Michael Angelo Batio's tonal masterpiece
Let there be no doubt: the Michael Angelo Batio Overdrive was created for this guitarist and his brand of melodic heavy rock, moody, moving, majestic. But the core of this pedal is a warm, natural-sounding smooth distortion that will appeal to any guitarist looking for the holy grail of overdrive.